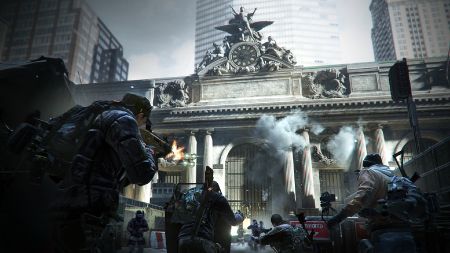 Agents in The Division utilize a variety of weapons to carry out their duties. These weapons have variable statistics that govern everything from their rate of fire to the drift incurred when firing.

The first thing Agents should know about the following statistics is that, while they might seem random, they are actually based on a base stat determined by the developers. There is a set range (usually +/-5 to 15 points, though there are significant outliers) within which weapons can scale their statistics, and weapons also seem to scale within a base increase per level. This algorithm is, as of yet, uncracked, though the base stats can be figured relatively easily.

On this wiki, each weapon page has the following attributes: DAM, RPM, MAG, Accuracy, Stability, Optimal Range, Average Stat, and Reload Speed. These statistics are explained below in their relative sections.

Damage, represented here using "DMG", is the relative damage dealt to an enemy from a weapon. This is a base stat, and is tied somewhat to the type of weapon. For instance, on average, a pistol sidearm will have less DAM than a LMG or SMG, simply due to the nature of the weapon, what the weapon is chambered for, and the power of the weapon. Damage can be augmented using abilities and various mounts.

Rounds Per Minute, represented here using "RPM", is the speed by which a magazine is emptied. This metric is tied to the minute, so the number is the number of bullets that can be put downrange in effective combat (taking into account reload time) per minute. For instance, for a RPM of 300, a weapon with a given reload speed can put 300 rounds downrange in a minute.

Magazine, represented here as "MAG", is the total number of rounds that can be carried in the active magazine, the active magazine being the live source of bullets that are currently being fired. In effect, this means that, while you might have say 500 bullets available, your MAG may only be 30, and thus you can only fire 30 rounds before having to reload.

Accuracy is a stat that is tied directly to a visual cue. This makes it unique, as, unlike other stats which utilize in game menus to display functionality and effect, accuracy has a clear graphical representation.

Put simply, accuracy determines the speed at which the reticle expands and contracts back to its original state. This in turn affects the spread of the clusters fired, with tighter reticle spacing needing a tighter grouping, and wider spacing needing looser grouping.

Stability determines the horizontal and vertical drift of the weapon nose. Think of the weapon as a stick attached to the chest of your player character. As force exits away from the character, this stick drifts and shakes, and as more force exits, this is magnified. This is what nozzle drift is. As a bullet exits, its kickback makes the weapon drift from center.

Accordingly, higher stability reduces this drift, and makes the nozzle point at the target more frequently and with less drift.

Optimal Range is more of a "sub statistic" rather than a main statistic. This stat determines the range at which Stability and Accuracy are 100% effective. Beyond this point, Accuracy and Stability drop off dramatically and logarithmicly.

The Average Stat is simply the sum total statistic of Accuracy, Range, and Stability, and is the total statistic that is used to determine the relative damage dealt to an enemy given their distance from the player.

Reload Speed is simply the amount of time it takes the character animation to complete the reload cycle for your weapon. This determines, in a way, your overall RPM as well as your ability to sustain reloads during combat.