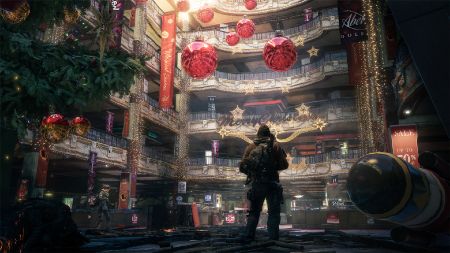 The city is a dangerous place, and in Tom Clancy's The Division, danger besets from all directions. Surviving is going to be a fight in and of itself. Here are some tips and tricks to help you survive.

The Division has some base settings that can be somewhat frustrating for new users. First and foremost, turn your brightness down to fix the washed out look, and up for more accuracy when sighting. The choice is one between aesthetics and function, as the environments will look much prettier darker, but your gunplay will be more accurate with higher brightness and thus visibility. Additionally, set your cover to use a button rather than being automatically, which should let you have more granular control over your interactions.

Think Through Your Mobility

Movement is a huge part of any tactical encounter, but for whatever reason, it's often overlooked.

When engaging an enemy, consider what your strength is. If the enemy attacks through a corridor, mobility is a strength, as suppressive fire can limit the range of actions your target can safely make.

This often forces people into situations they would rather avoid. If you find yourself in a situation where you can force an encounter between yourself and another player, you've already won.

Additionally, planning your movements into and out of cover can negate a lot of the damage a player may otherwise incur. Plan your movements around the terrain as best as you can.

It should go without saying, but staying with your team is paramount to survival. If you get separated from your group, you can always go into the menu, select a member not in combat, and fast travel to them. When moving as a group through the dark zone, have a member facing backwards while the others move forwards to prevent rogue agents from getting the drop on you. You can mark enemies for your group - use this to communicate non-verbally and stick together.

Mark the items you don't want as junk in your inventory. This will let you deconstruct them at vendors, and will make management much easier without having to worry about the extra items.

When fighting in the Dark Zone, managing your ammunition is incredibly important. If going Rogue or dealing with Rogue Agents, you can very quickly and easily run out of ammunition, putting you in situations where you suddenly run out of ammo while your enemies haven't. Don't shoot in full auto. Opt for burst fire when possible, and when not, force burst fire as habit, so you can reduce the amount of wasted ammunition due to muzzle drift.

Don't forget that you have a huge arsenal of grenades at your disposal. These tiny weapons can be thrown at range, and are best used from cover. When pinned down by a skilled marksman, deploying a grenade can clear the area, control a crowd, and even lend some distraction, allowing you to slip by and into relative safety.

When possible, try to maintain clear and high ground. Take vantage points, and ensure that you are firing at the enemy down a corridor of obstacles so as to grant you a lot of cover, while forcing the enemy down a chokepoint funnel. Be careful when engaging enemies with ranged weapons - their range can negate a lot of ground gained through this technique.

Your enemies aren't just external - they can be in your group as well. Watch for strange behavior, and try to keep your back guarded by someone you trust. Keep in mind that employing this strategy may make others leery of you as well, so the best thing you can do is to find groups of people you have a history with and that you trust.

Going against a group of rogue agents? Lay down some suppression fire with a high rate of fire weapon. Even if you don't hit anything, the constant sound of open fire will distract the enemy, and make your own team's movements relatively hidden. This is one of the few times ammo conservation can be ignored, as heavy fire and high rate weapons are best used as part of a team and in this specific scenario.

Invest In Your Future

Money does nothing simply sitting. Invest in upgrading your Base of Operations to have a better chance at surviving. The sooner you reach level 12, the sooner you can start using high end gear, and your upgrades to the base of operations will help you survive out in the wilds long enough to get to this point.