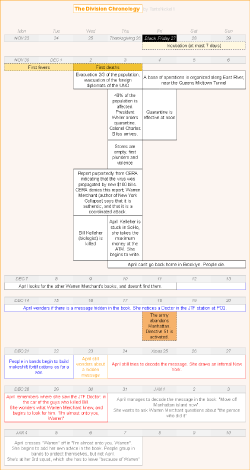 The following events are the chronological story of The Division, which takes place in 2015-16.

After the Black Friday infections, the first symptoms began to manifest, specifically fevers.

By December 1st, public schools have closed and students are kept home.

In the first 48 hours, Manhattan descended into chaos. 2/3rds of the population was evacuated, and diplomats and government leaders retreated from the city. A report rumored to be from CERA was released suggesting that the viral infection was propagated using US money during Black Friday. CERA itself denies this. Warren Merchant verifies that it is indeed a CERA report.

On December 2nd, Bill Kelleher is murdered. On December 3rd, his wife, April Kelleher withdraws the maximum amount possible from her ATM, and goes into hiding while writing a survival guide that will be widely used by future Division Agents. By the end of December 2nd, 48% of the population is affected. President Weller orders Colonel Charles Bliss into Manhattan to regain control.

The Joint Task Force is created by December 3rd. Power is spotty and frequently out, Television signals are almost non-existent, internet down in New York.

December 4th - Quarantine is officially implemented. The military creates a Base of Operations along East River near the Queens Midtown Tunnel.

December 6th - Some parties recognize Dollar Flu as smallpox, while CERA formalizes their Base of Operations at the Post Office while turning Hudson Yards into an operating base. Cell service begins to drop.

December 15th - People resort to eating Pigeons to survive in some locations.

December 17th - JTF in full force, Dark Zone is created. Rioters are on active hunt. Hospitals shut down, some believe to move the infected to the Dark Zone.

December 18th - The military officially retreats from Manhattan, leaving hundreds of police, firefighters, and government officials behind along with thousands of civilians. Directive 51 is enacted and the First wave is Activated.