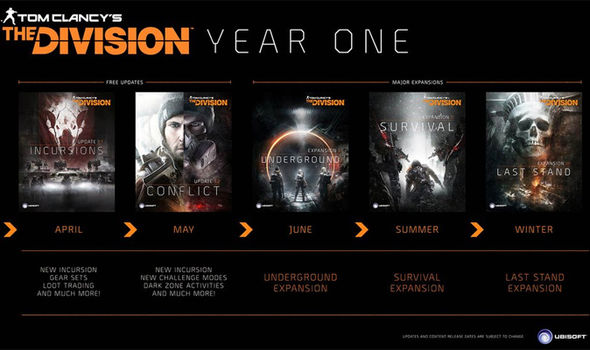 Conflict is the one in a series of DLC planned for The Division. It features new gear sets, gear trading, new game modes, and more. It is one of two free updates, the other including the Incursions DLC.

The Conflict DLC adds several new modes and features, as well as a bevvy of new gear sets. It will include the Clear Sky Incursion, an incursion in which Agents must face the Rikers to take back an anti-air missile site previously held by the Last Man Battalion. Additionally, the update introduces High Value Targets, a new bounty-based system where High Value Targets appear in a HVT Officer listing, along with a description, their level, the recommended gear score to take them down, and likely details about what the bounty reward is. When you take this on, you have a limited amount of time to seize the HVT.

Additionally, the Dark Zone will now have hijacking enabled, in which Rogue Agents can run to an extraction rope, cut it, and cause the loot to fall to the ground. The loot can then be left or taken by anyone in the immediate area.