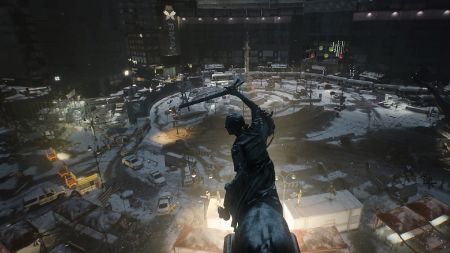 Clear Skies is one of the incursion missions in The Division.

The Clear Sky Incursion was added in with the 1.2 update, after the original Incursion mission, Falcon Lost. Many players suspect that this Incursion was meant to originally be before the General Assembly mission, due to the fact that the cutscene that triggers afterwards references going to meet Bliss at the UN, and the final mission mentions that there is no helicopter due to the triggered anti-air weapons. This was mentioned in the /r/TheDivision subreddit. This garnered an official response from Massive, which many players questioned.

The Clear Skies incursion is not a set wave-based encounter, unlike the original Falcon Lost incursion, and is instead two encounters with infinite waves of enemies. When starting this incursion, your first obstacle is going to be the barrier blocking access to the Broken Circle. Take out the Rikers in this area, and clear the barrier to move forward.

Once you move into Broken Circle, the enemies will start to ramp up. In the first area, you're mostly dealing with normal purples, but once you get into the main area, elites start to show up to wreck your day. Take them out as best you can, and watch out for the orange diamond enemies after the elites are taken down, because they'll rush at you with explosive packs. Take them out, grab the pack, and put it on the barricade on the left. Another couple waves will come after you, same as before, granting you a second explosive pack. Grab that, and blow the door.

This entire fight is punctuated by mortar strikes and pop up enemies, so make sure you're not just aware of the waves coming, but of the environmental threats as well. If you're having problems with this, you can try to find some dead spots, but that's not an assured way to stay free of crossfire and mortar damage.

Regardless, once you're in, go to the center and press the laptop button to activate the helicopter defenses. You can do this a multitude of ways. One popular way is to have one player grab the laptop while the rest lay down suppression fire to take the heat off the other player. Another way is for the players to move together, back to back, clearing the room and then letting one player take care of the laptop. Whatever you do, don't just run for it, because you'll get cut down pretty much immediately.

However you get the laptop, right after, two fuse boxes will appear. Carry them to the middle of the circle and plug them in. You can do both at one time, but it seems like the enemies target fuse carriers, so you might be calling too much heat on yourself. You can also split up like you did for the laptop button, with one person grabbing the fuses and the others covering him, but it's really up to how the team functions best. Once this is down, more enemy waves will spawn, and the boss of the Incursion will drop out of the helicopter to fight as well.

The Boss for this incursion is actually pretty easy with the right strategy. The big thing here is to not get bogged down with the enemies and the boss, and instead to focus all your team's fire on the boss first. He's got a great shield, but if you focus a ton of fire on him, you'll be clear in no time to take out the rest of the surrounding enemies.